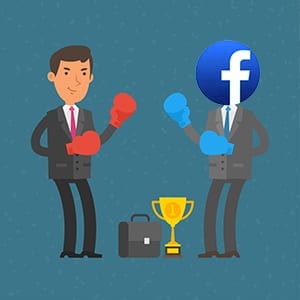 Facebook is at it again, introducing new changes to one of the driving forces on its website, the News Feed. The social media giant recently announced an update that will keep its users from missing stories from their friends and family, but one that will inevitably also affect the posts and content they see from businesses and brands. Some call it “Facebook Zero,” others call it the “Reachpocalypse,” but they’re all describing the unavoidable consequences of the Facebook ranking algorithm.

Daniel Brophy of Page 1 Solutions says this algorithm can control your Page’s organic reach on Facebook (most of the time in a negative way). He says in the past, shifts in the social media site’s News Feed algorithm restricted the reach of published content by brand pages to 16 percent. They’ve also prioritized the posts of users’ friends and “high quality content” over that of brands. This next go ‘round won’t be much different, actually Brophy thinks it may be much worse. In June, Facebook released the following statement:

Overall, we anticipate that this update may cause reach and referral traffic to decline for some Pages. The specific impact on your Page’s distribution and other metrics may vary depending on the composition of your audience. For example, if a lot of your referral traffic is the result of people sharing your content and their friends liking and commenting on it, there will be less of an impact than if the majority of your traffic comes directly through Page posts.

Brophy says if you think of Facebook’s original purpose of its News Feed, you will recall that it has always aimed to show the most relevant content for a particular user, as well as be a means for them to stay connected to friends and family. However, the site has since transformed into more than a social networking site and has become a content distribution and publishing house for businesses. When those brands try to take up some of the already packed real estate in a user’s News Feed, they’re competing with more than just other companies but friends and family, too.

So, what will it take to arm your firm against the Facebook algorithm? That depends on you. The algorithm is governed by what’s called an “Edge”. These can be everything from someone liking or commenting on a post, RSVP’ing to an event, or tagging a photo. Brophy says edges made by friends and family are always at the top, but as long as you post relevant, informative, and entertaining content, your posts can stack up as high as they do. He says making sure you are regularly sharing this content is also key to attracting new clients and keeping your business from becoming an unintended casualty of Facebook’s changing algorithm.