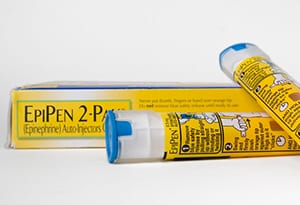 Last month Mylan Pharmaceutical CEO, Heather Bresch, was forced to defend the sharp increase in the price of an EpiPen while her salary skyrocketed to $19 million. Bresch deflected by claiming the rise in the price was due to improvement in the pens and Mylan having to pay the “middle man.”

According to pharmaceutical industry insiders, Mylan is paying “no more than $30 per EpiPen.” The “middle man” gross profit of the EpiPen is close to $326. How was Mylan able to gross approximately $275 per EpiPen while squeezing out generics? According to Adam Fein, president of Pembroke Consulting, “Mylan ended up with a monopoly because of the failure of the government and competition to put viable alternatives on the market, and they aggressively increased prices last year." The increase in the price has outraged consumers and lawmakers alike including Bernie Sanders. Mr. Sanders emailed a statement to NBC News stating,

There's no reason an EpiPen, which costs Mylan no more than $30 to make, should cost families more than $600. The only explanation for Mylan's outrageous price increase is that the company values profits more than the lives of millions of Americans."

Mylan is now facing a firestorm of backlash over the price of the EpiPen. U.S. Senators Richard Blumenthal and Amy Klobuchar requested the US. Federal Trade Commission issue a subpoena to Mylan regarding the pricing of the EpiPen.  In addition to the subpoena, New York Attorney General Eric Schneiderman announced his office is investigating Mylan’s EpiPen4Schools® project for potential violation of antitrust laws.  Allegedly, the contracts the participating schools signed may have contained purchasing requirements. Schneiderman states,

If Mylan engaged in anti-competitive business practices, or violated antitrust laws with the intent and effect of limiting lower cost competition, we will hold them accountable. Allergy sufferers have enough concerns to worry about. The availability of lifesaving medical treatment should not be one of them."

Following the subpoena and anti-trust investigation, an Ohio woman filed a proposed class action lawsuit in the Court of Common Pleas in Hamilton County, OH. The suit contends the skyrocketing price of the Epi-Pen violates the state’s consumer protection law. The complaint says,

Mylan has denied there are no purchase requirements for participation in the program stating, “Ensuring access to epinephrine- the only first-line treatment- is a core part of our mission.”

Only time will tell if Mylan will do the right thing by consumers and lower the price of the EpiPen. We at Advocate Capital, Inc. support the work done by trial attorneys across the US as they fight to hold corporations, including big pharma companies accountable.