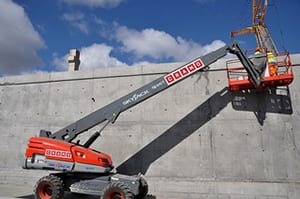 Advocate Capital, Inc. friend and colleague Roger E. Booth recently settled a case on behalf of a father/son team who were injured while operating a boom lift on a construction site. The plaintiffs, Razmik and Sam Kirakosyan, were employed as sheet metal workers. On the accident date, they were using a boom lift to install sheet metal at an elevated location on a school construction site.

Just prior to the accident, the basket of the boom lift was located below an overhang of the building as plaintiffs performed their work. Suddenly, for reasons that were never quite clear, the basket moved closer to the building trapping the Kirakosyans between the basket and the overhang. Plaintiffs contended that Razmik’s back then made contact with the controller (“joystick”) that elevates the basket. This constant contact between his back and the controller exerted extreme pressure that crushed plaintiffs causing their extensive injuries. The defense argued that it was simply the plaintiffs’ negligent operation of the lift that caused them to be trapped and that the joystick was not involved.

Like most boom lifts on the market, this unit came equipped with a safety device to prevent this type of accident.  As designed, the joystick was not supposed to move unless the operator simultaneously lifted up on a ring while moving the joystick. During discovery, various employees of the company that rented the lift to plaintiffs’ employer were only vaguely aware of the existence of the safety device. It became apparent that they did little or nothing to ensure the device was properly maintained. After numerous depositions and on the brink of trial, Mr. Booth secured a settlement just under the defendant rental company’s insurance policy limits.

Unfortunately, there is a long history of industrial accidents like the Kirakosyans experienced. In fact, Mr. Booth and his team completed an extensive study of accidents involving equipment controllers resulting in catastrophic injuries and death. Click here to read more details.

In addition to his extensive trial work on behalf of injured workers, Mr. Booth is also a frequent lecturer and a published author. He co-authored The Personal Injury Handbook along with his father, Larry Booth. This popular publication is used by trial lawyers everywhere.

Citizens and workers in all fields should be thankful for law firms like Booth & Koskoff who not only fight for their rights but forge ahead to change the mindset for employee safety.